Not only the Rogier project will be on view at the exhibition about privacy at Kunstenlab, Deventer (NL), but also Merging Spaces and 24H! That’s a nice development!

Click on ‘more’ if you want to know more about the projects that will be shown at the exhibition. 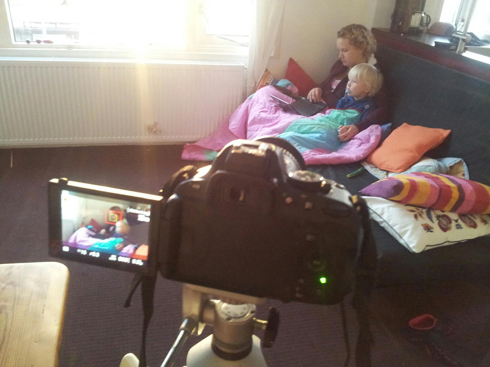 24H is a real time film with a duration of twenty-four hours in which a woman is followed for exactly one day in everything she does. It examines what happens when we start to share everything with someone else, whilst being aware of that. The video was neither edited nor censored by the maker. The person followed knew up front that the film would be shown numerous of times in various locations, allowing and promoting absolute voyeurism.

Merging Spaces can be seen as a social experiment. Tweets (Twitter messages) publicly spread online were localised to establish their geographical origin. Through this project they were brought back to their original location but this time offline, using ordinary paper stickers. This took place in the Alblasserdam area, with the Kinderdijk Project as my starting point.

The entire project is documented in a book which is placed on a giant map with numbered pin points during exhibitions. The numbers on both the maps in the book and the installation correspond with the tweets being spread. Additionally, the book contains an essay written by me, click >here< to read it.

Of course, this project did not go by unnoticed; soon the authors of the tweets found that their own tweets appeared spread throughout their own living environment. I discovered this because they shared their thoughts about that on Twitter. Their replies are also included in the publication.

And last but not least, Rogier.
For this project I followed someone who shared so much about himself online, that it was possible to base a novel on it. Through a random search query on Twitter I found the 17-year-old Rogier Hogervorst and followed him for three months on Twitter and Instagram, from the 1st of April until the 30th of June. He had shared a significant amount of personal information online. So much so that it was possible for me to write a novel based on the data he published. During those months Rogier shared 5638 Tweets and 137 Instagram photos. The novel that emerged contains three chapters, one for each month.

During this process Rogier was not aware of me following him. Informing him or to ask for consent was not necessary; all messages used for the book were publicly shared by Rogier himself. After the book was published I notified Rogier via Twitter.